The Crooked Lines of Life

After the 2004 Indian Ocean tsunami, Holly Michael of Wisconsin traveled to South India with her husband and joined hands with the army of volunteers to help in the recovery efforts. Holly’s husband is Bishop Leo Michael, a native of India, whom Holly met when asked to do an interview on the success of a small parish.

Two people from two different cultures, raised on two opposite ends of the world, found they are not so different when linked in the common goal of helping others. We need more like them in the world.

This is the story of Holly Michael, journalist, author, and to me: cherished critique partner. If ever there were a book that embodied love and compassion, a story written in such luminous, deeply personal prose, Crooked Lines is it.

Here is Holly sharing the inspiration behind her story — a short narrative complemented by photos.

Having grown up on a dairy farm in Wisconsin, I was enraptured by stories my husband and his friends would share about life in a strict religious order in India. In the late 1970s, they all left their villages as naïve teenagers to enter into the seminary.

They struggled through desperate situations in the slums of India, ministered to the untouchables from the caste system, served in leper colonies, and even met Mother Teresa.

My life was so different…but maybe not. Sitting around with these friends, I realized we could all relate on matters of the heart and while coming from different cultures, we all shared similar emotional experiences. 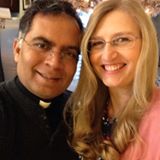 So I began writing Rebecca and Sagai’s parallel, but emotionally-themed stories. In Crooked Lines, Rebecca’s symbol for peace in her dysfunctional life is India and she’s sure she’ll find answers when she gets there—a goal that she can’t seem to reach. Across the oceans, Sagai is called to the priesthood. He is refined and defined by the challenges he faces along the pathway toward his goal.

The two characters learn of each other through Sagai’s mentor, Father Michael, who meets Rebecca on a visit to America. He invites the two to pray for each other.

For the past ten years, during many visits to India with my husband, I’ve traveled to the places in Crooked Lines—walked the halls of the seminaries, visited with the heart-wrenching Mother Teresa Home for the Dying, and spent time in remote villages in India. Days after the 2004 tsunami, I stood among hundreds of coconut trees on the shore of the Indian Ocean and wept upon learning the saplings were grave-markers of children who drowned. 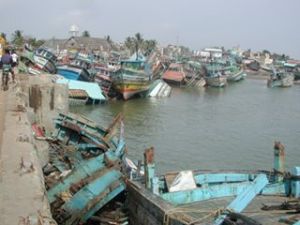 I’ve also experienced pure joy standing at Tiger Hills in Darjeeling watching the sun come up over the majestic Kangchenjunga, the highest peak of the Himalayas.

Along the cooked lines of life, we all experience sadness and joy, but where ever we travel, like Father Michael in Crooked Lines says, “Peace can’t be found in a place, but in the heart.”

Most every person who read and reviewed Crooked Lines asked for a sequel. The story does continue. The sequel will be released at the end of January. And in between that time, my husband and I are returning to India. Since December 26, 2014 marks the ten-year anniversary of the tsunami we will revisit the remote villages in Nagapattinam, South India and publish a small book; a before and after look at the lives of the orphans we helped and share the status of the villages.

I read this story in its early stages and couldn’t recommend it more.

This entry was posted in World, near and far and tagged 2004 tsunami, Crooked Lines, Holly Michael, India. Bookmark the permalink.

30 responses to “The Crooked Lines of Life”

I welcome your thoughts. Cancel reply